Switch Takeoff The next step in the natural progression of the estimate would be to count the devices. We start with the switches to follow the order of most plans. As with all phases of estimating, there are different thought patterns to this procedure. We have found that by performing the takeoff as the plans shows, it saves steps when we win the job. Some estimators only count the total number of switches because of the time savings, and a lot of estimating software doesn’t allow you the ability to input a 3 gang switch with 2-single pole and 1-3 way. We have found that the Best Bid Electrical Estimating Software will allow you to input any combination of switches that the project includes. The takeoff We start by creating a takeoff sheet or using a product like the Electrical Solution computerized takeoff sheet and listing the switch configurations that are found on most plans. It could look something like this: You can make it as elaborate as you like but the method is the same. We suggest that if the project has multiple floors, that each floor be taken off and entered separately. This allows you more control and capability of monitoring man-hours when you win the bid.

What’s the Best Electrical Estimating Software for My Company.?

If You Estimate or Ever Think about Purchasing an Electrical Estimating software ! 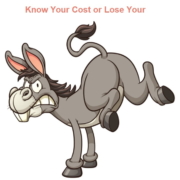 Labor Burden-Know Your Cost or Lose Your +++

The Lost Art of Electrical Estimating